You are here: Home / Library / The Endless Search – A Memoir 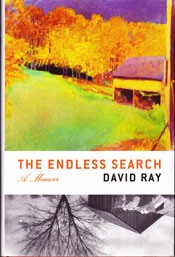 In THE ENDLESS SEARCH, acclaimed poet DAVID RAY creates a harrowing narrative that weaves its way through decades of searching: for a father, a home, for the approval and love he is so often denied.He tracks through a Dickensian childhood in bone-poor Oklahoma, shufled from foster home to orphange and back again by his hard-working but neglectful mother. During his adolsecence, Ray is tormented and sexually abused by a wealthy and sadistic guardian, into whose care he was entrusted in hope for a future inheritance. He relates his experiences in a literary cult – the infamous Colony of Lowney Handy and Jim Jones – that employed the same violence often found in religious and paramilitary fringe groups. Ray unabashedly confesses to his career as a peeping Tom and opens his FBI dossier to his readers, surprised that agents followed him for years, suspecting him of “un-American” activities.

In the end, DAVID RAY demonstrates the possibility of overcoming staggering obstacles in one’s journey toward personal fulfillment.