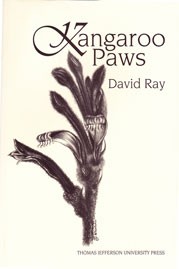 Poet and essayist DAVID RAY is the author and editor of twenty-three books. He is the Founding Editor of New Letters, and has won the William Carlos Williams Award (he is the only poet to have done so twice), the Maurice English Award, and the Allen Ginsberg Poetry Award. Ray has received fellowships from the Rockefeller Foundation and the National Endowment for the Arts, and his work has appeared in Harper’s, The Paris Review, The New Yorker, The Iowa Review, New York Times Magazine, and other publications.

DAVID RAY is the author of several books of poetry, including Wool Highways and other Poems (Helicon Nine Editions, 1993) and The Tramp’s Cup (Chariton Review Press, 1978), both of which received the Poetry Society of America’s William Carlos Williams award; Not Far from the River (Copper Canyon Press, 1990); The Maharani’s New Wall (Wesleyan University Press, 1989), which was nominated for a Pulitzer Prize; and Sam’s Book (Wesleyan University Press, 1988), which won the Maurice English Poetry Award. Ray has also received a National Endowment for the arts award for his fiction. He is presently a professor of English at the Univerity of Missouri – Kansas City.