You are here: Home / Library / From Place to Place Personal Essays 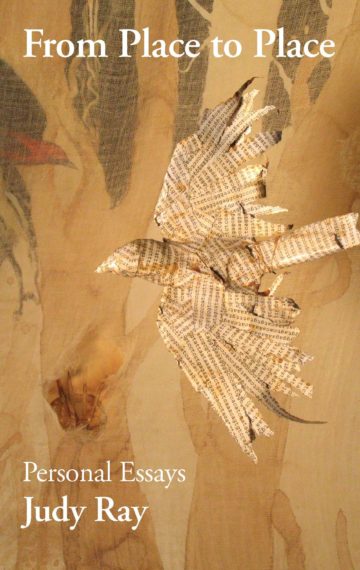 “A brilliantly crafted and beautifully written series of essays….with just a trace of a British accent and a strong sense of the irony of human existence. Her leaps of thought and imagination are daring and sure-footed. From Place to Place is a fascinating book.”
—RICHARD SHELTON
[Going Back to Bisbee and Crossing the Yard]

“Judy Ray has the spirit of an explorer, the conscience of a Quaker, and the descriptive power of a poet. Raised on a farm in England, she ventured to Uganda, the U.S., India, Australia, and, in these essays, she takes us along.” —BARTON SUTTER
[Cold Comfort: Life at the Top of the Map and My Father’s War]

These essays (and a sprinkling of poems) explore subjects both far and near— the process of becoming a U.S. citizen, travel in places where the author has lived for a few months or years, helping to solve a murder, writing, an untimely tragic death, and some commonplace experiences that will be familiar to readers, such as moving to another residence or serving on jury duty. Judy Ray is author of several poetry collections that include To Fly Without Wings (Helicon Nine Editions). Her chapbooks include Fishing in Green Waters, Sleeping in the Larder: Poems of a Sussex Childhood, and Judy Ray: Greatest Hits. Earlier books are Pebble Rings, Pigeons in the Chandeliers, and a prose memoir about India, The Jaipur Sketchbook. While living in Kansas City, she was an associate editor of New Letters magazine, and then the first director of The Writers Place, a literary community center. She now lives in Tucson, Arizona.